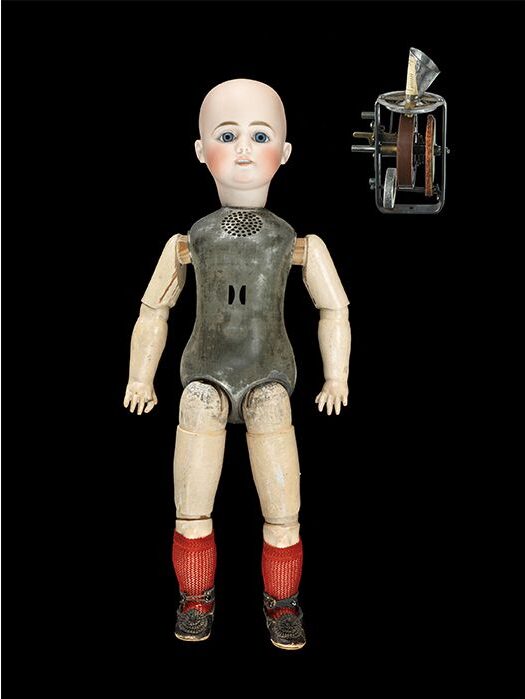 or: Sound recording before gramophone records

Back in 1888, Thomas Edison decided to create a whole project of talking dolls.

The New York Evening Sun proclaimed the dolls to be perfect and stated, “There is nothing left but to produce them in large numbers.”

The first diary notes related to this project were made by Edison in September 1888. On November 22 of the same year, the article “Dolls That Really Talk” was published in the New York Evening Sun, telling about a doll created by the inventor, reciting a poem with an expression.

“…Then Edison got a brunette doll with shiny black curls and sparkling brown eyes. This doll began to quickly repeat: “Twinkle, twinkle, little star. How amazed I am that you exist. On top of the world, so high. Like a diamond in the sky.” And the doll read it with feeling and human expression,” reported the New York Evening Sun.

Because Edison at the time did not have a viable technology for replicating sound recordings on a large scale, he hired two women with suitable voices to make many recordings in this way. The “puppet” songs themselves were the first sound recordings intended for general sale. How long, in his opinion, could it take for mass-produced talking dolls to be brought to market?

Another newspaper article said that Thomas Edison hired two women whose voices were just right to make recordings for the production of mass-produced talking dolls. This is the earliest evidence that someone was hired to constantly recite the voice on the phonograph. In April 1890, the newspaper loudly declared the perfection of the dolls, and Edison brought the dolls to the world market.

In April 1890, Edison really brought his doll to the market, but then it was no longer equipped with a metal audio recording medium, but with a wax one. However, the project failed: no one took the dolls, and they often broke due to a too-fragile, short-lived recording. Of the entire project of talking dolls, only a single song on a tin ring has survived to our time, writes ScienceDaily.

The heart of the doll was a ring made of hardened tin, which is kept in the Edison Museum – the creator of the world’s first light bulb, the world’s first talking doll, and many other irreplaceable and necessary things.

The solid tin ring, kept in the Edison Museum (Thomas Edison National Historical Park), has long attracted the attention of specialists. A fragment of an old label tied to the ring explained that the exhibit was a recording for a phonograph, but no one knew why it was made on the ring and what it was intended for.

In a dusty box, only a fragment of a label spoke about the purpose of the rather crumpled pewter item, but what was written on the cylinder, and why exactly on it, remained a mystery for many decades.

Not so long ago, managed to listen to and decipher an old recording, from which it became clear what the doll was saying and why.

With the help of Haber and Cornell, managed to hear a fragment of the popular old children’s song “Twinkle, twinkle, little star”, performed by an unknown woman. They had to turn over huge volumes of archives before they found out the purpose and origin of this record.

Historians Patrick Feaster of Indiana University and René Rondeau of California have searched the archives for the origin of this recording. It turned out that in 1888, Thomas Edison conceived the project of talking dolls, hiding a tiny phonograph with a looped recording of a poem.

The ring has survived to this day rumpled, so it was not possible to play all its grooves in the usual way. Scientists Carl Haber and Earl Cornell used a 3D optical scanning technology developed in 2007-2009 in collaboration with the Library of Congress. Using rays of light, scientists built a digital model of the surface of the ring and then translated its relief into sound.

The note specified the origin of the recordings: “The two young ladies in the room are constantly talking to tiny talking machines that a skilled worker could turn out in large quantities.
Sound is recorded on cylindrical strips of metal 2.5 inches in diameter, about one-eighth of an inch thick and half an inch wide.”

or: Why hair grows on a Japanese doll Okiku Japanese horror stories are among the most creepy. Sometimes their origins originate in reality. And one...
or: Dolls for entertainment in Europe in the 19th century A popular type of doll in the 19th century. Their skirts were made from pieces...
or: Naked doll young ladies 18th -19th centuries Wood and paper-mâché in the doll bodies of young ladies of Northern Italy in the early 18th...
or: Wooden toys from Germany in the 1950s Wooden musical wine stoppers start playing music when the bottle is tilted. Musical stoppers for wine bottles...
or: Frightening dolls find In 1836, an amazing and somewhat frightening find was accidentally made, which is now stored in the national museum of Scotland...
or: Limberjack, Jig doll Dancing dolls or Limberjack, Jig dolls have been used for at least the past one hundred and fifty years in Great...