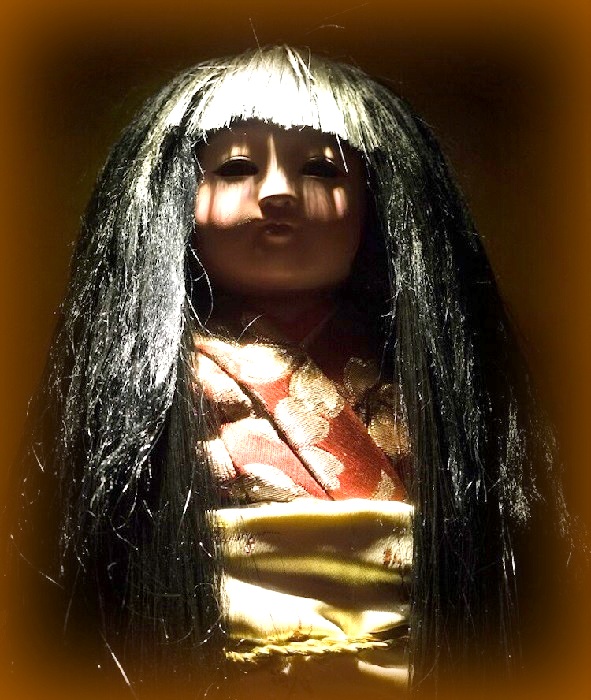 or: Why hair grows on a Japanese doll Okiku

Japanese horror stories are among the most creepy. Sometimes their origins originate in reality. And one such example is the mystical story of the Okiku doll.

Horror traditions in Japan have a solid history dating back to the 17th and 18th centuries when scary tales began to spread widely in the country, collectively called Kaidan (“ghost stories”).

Kaidan’s touched upon the spectrum of all kinds of mystical phenomena associated with otherworldly forces – ghosts, spirits, ghosts, demons, buried alive, mysterious natural phenomena. There was also a large layer of mystical stories about sinister dolls, many of which are based on real events. One of the creepiest is the true story of the Japanese Okiku doll.

This doll seems the most ordinary, but it is only at first glance. According to legend, she was possessed by the spirit of a dead little girl.

Doll Okiku actually exists and she “lives” in the city of Iwamizama, on the island of Hokkaido, in one of the local temples. It is named after the very little girl Okiku and is a figure in a kimono. The figurine is less than half a meter tall, has beady black eyes, and long black hair that temple attendants constantly cut as it grows back at the rate of human hair growth.

Doll Okiku actually exists and she “lives” in the city of Iwamizama, on the island of Hokkaido, in one of the local temples. It is named after the very little girl Okiku and is a figure in a kimono. The figurine is less than half a meter tall, has beady black eyes, and long black hair that temple attendants constantly cut as it grows back at the rate of human hair growth.

The history of the Okiku doll began on the island of Hokkaido more than a hundred years ago, in 1918. Initially, it was an ordinary toy sold in a small shop in Sapporo. It was then that 17-year-old Yoikishi Suzuki gave it to his 2-year-old sister. In the town of Sapporo, where Yoikishi was at a maritime exhibition, he purchased a doll as a souvenir. The little girl liked her brother’s gift very much and, calling her by her own name – Okiku, she played with her all day long, practically without letting go.

Soon, the girl’s parents and her brother, seeing the child’s love for the doll, began to believe that there were now two Okiku in their family – one real, the second toy.

But a year later, disaster struck: unexpectedly, the girl fell ill with the flu and died suddenly from complications. In memory of their daughter, the parents placed her beloved doll on the home altar – the most beautiful and brightest place in the house, where they prayed every day for the repose of the baby’s soul. Perceiving the toy as a part of their dead girl, the mother and father turned to her image, talked to her, and even sometimes consulted.

But soon the relatives noticed something unusual: the doll’s pitch-black, straight hair, which initially barely reached the shoulders, became longer and longer. They grew to the length that the baby had during her lifetime, after which their growth slowed down somewhat. Parents cut their hair – and it began to grow again. After such an incredible discovery, the relatives considered it a sign that the soul of their child had found refuge in a doll. The news of the unusual doll quickly spread throughout the island.

Specialists of that time, who studied paranormal phenomena, stated that the ghost of Okiku had moved into the doll, and the girl’s parents themselves were to blame – they did not give the daughter’s soul peace, and now she, rushing between two worlds: the world of the living and the afterlife, found only one thing for herself habitat – your favorite toy.

At Mannenji temple in Hokkaido, Japan – you’ll find a haunted doll named Okiku who is rumored to grow actual human hair and the craziest thing is, it never stops growing. Today, I’ll tell you the whole story of Okiku the haunted doll.

or: Dolls for entertainment in Europe in the 19th century A popular type of doll in the 19th century. Their skirts were made from pieces...
or: Naked doll young ladies 18th -19th centuries Wood and paper-mâché in the doll bodies of young ladies of Northern Italy in the early 18th...
or: Wooden toys from Germany in the 1950s Wooden musical wine stoppers start playing music when the bottle is tilted. Musical stoppers for wine bottles...
or: Frightening dolls find In 1836, an amazing and somewhat frightening find was accidentally made, which is now stored in the national museum of Scotland...
or: Limberjack, Jig doll Dancing dolls or Limberjack, Jig dolls have been used for at least the past one hundred and fifty years in Great...
or: Sound recording before gramophone records Back in 1888, Thomas Edison decided to create a whole project of talking dolls. The New York Evening Sun...